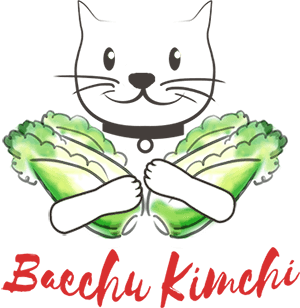 A Brief Science of Lacto- Fermentation

Kimchi is a traditional Korean dish made of fermented vegetables. There are hundreds of kinds of kimchi in the Korean Peninsula, but the most well known type of kimchi is Napa cabbage kimchi (or baechu kimchi).

Like many other fermented foods across the globe such as wine, sauerkraut, and yogurt, kimchi is the result of a special type of fermentation. The bacteria that is responsible for this type of fermentation is available everywhere – vegetable skins, in the air, on your hands – you name it. It is also found in mammal’s milk, which means that it’s with us from our very first meal! It’s abundance across the entire globe explains why fermented foods are used in so many different cultures.

This bacteria is called Lactic Acid Bacteria, giving this type of fermentation the name Lacto-fermentation. Through the fermentation process, new flavour profiles are created as the bacteria break down large flavour compounds, refining the flavour molecules perceived by our taste buds.

The Science
How the heck did this happen?

The process that turns vegetable to kimchi is called “Lacto-fermentation” – a transformation process by Lactic Acid Bacteria (LAB). The bacteria metabolizes carbohydrates (such as sugar) in vegetables into lactic acid, which gives fermented foods their sour flavour and increases their acidity, making them safe to eat.

Essentially you’re letting the bacteria work its magic in your food. This might sound a lot like what happens when food rots. So what is the difference?

“[Rotting] is a club where everyone gets in: bacteria and fungi, safe or unsafe, flavor enhancing or destructive. [Whereas in fermentation], you’re taking on the role of a bouncer, keeping out unwanted microbes and letting in the ones that are going to make the party pop”

Keeping this analogy in mind, the process of perfecting an ideal environment for safe and delicious food can be broken down into three stages:

Most lacto-fermented vegetable starts with submerging vegetables in brine. This is because many harmful pathogens such as Salmonella cannot tolerate salinity. The salt will penetrate its cell wall and kill it. But guess what? Our bad ass LAB can survive in salt just fine!

LABs are also anaerobic, which means they do not need oxygen to survive. By submerging the ferment in brine, we get rid of all the wild oxygen-loving pathogens that may spoil the mood by making it moldy or unsafe to eat.

Stage 2. The acid kicks in…

As LAB gets comfortable in brine, it starts working its magic by eating the sugar and other carbohydrates in the vegetables and then producing lactic acid. The acid lowers the pH value of the ferment and creates an even more hostile environment, preventing pathogens like c. botulinum (botulism) from growing.

Besides lactic acid, carbon dioxide (CO2) is also an exciting by-product of LAB. CO2 makes the kimchi pop when you open a jar for the first time, and adds a fizzy kick to the taste. This is a sign of life! Carbon dioxide, however, can build up pressure in your kimchi jar. This is why it’s a good idea to burp your kimchi once in a while to avoid leakage. Simply remove the lid for a second and then put it back on.

Like a never-ending party, Kimchi rarely goes bad! The fermentation process breaks down nutrients and minerals, making it easier for our body to absorb. The lactic acid bacteria will continue to metabolize sugar until all the sugar is gone. After that the kimchi will simply turns to vinegar (which can take years to happen). Make sure to keep your kimchi refrigerated to slow down the fermentation process. Old Kimchi can be used in soup or stew, and the left-over juice is great for Caesar cocktail!

Let us bring you the party bus. Check out our selection of Kimchi